August 26, 2021 “We Just Show Up and Sing” – Waukee A Cappella Prepares for Regional Showcase

A Cappella is Waukee High School’s top auditioned ensemble—is open to students enrolled in grades 10-12 who have successfully participated, for at least, one year in the choral program and complete a rigorous audition process. This ensemble provides an intensive and highly rewarding musical experience. In-depth study of music from each time period of musical history is explored, including multi-cultural selections from around the world. Vocal production, independence, and musical precision are explored in detail with a deliberate emphasis on unaccompanied singing. 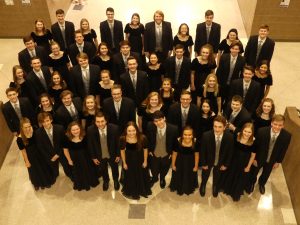 A Cappella has earned a reputation for excellence. They frequently perform at various festivals and events and have worked with such notable performers as the King Singers and international Opera star, Simon Estes.  The group has earned division I ratings at the Iowa High School Music Association Large Group Choral Festival for the past 21 years. They also perform at the annual Festival of Peace, frequently record CD’s and tour bi-annually.  A Cappella represented the North Central Division of the American Choral Directors Association (ACDA) at the 2005 National Convention in Los Angeles, at the 2006 North Central Division Convention in Omaha, and at the 2010 North Central Division Convention in Minneapolis.  The ensemble was most recently selected to perform at the 2015 National ACDA convention in Salt Lake City.  Their performance standards, awards, and level of excellence have placed A Cappella as one of the top high school ensembles in the United States.

Concert Choir is an auditioned 11-12 ensemble that is open to students who elicit a mature vocal sound and strong reading skills.

Intermezzo is a non-auditioned ensemble open to all students grades 11-12.  Students in 10th-grade students will be used to create a balanced ensemble.

Bass Clef is open to any 11th or 12th-grade bass or tenor voice participating in the Vocal Music Program during first block not enrolled in 11/12 band or publications.

Cantate is open to any 11th or 12th-grade treble voice participating in the Vocal Music Program during first block not enrolled in 11/12 band or publications.

Vox Musica is an auditioned ensemble for 10th-grade soprano and alto voices. Study of singing techniques and skills, focusing on sound unification, intonation, and vocal independence will be explored and discussed through a wide variety of literature. Solfege and music literacy will be explored in detail.

Warrior Chor is open to any 10th-grade bass or tenor voice participating in the Vocal Music Program.  Warrior Chor meets during the second block for the first two terms of the school year.

Bella Voce is open to any 10th-grade treble voice participating in the Vocal Music Program.  Bella Voce meets during the second block for the first two terms of the school year.

10th Grade Chorale meets during the second block for the second two terms of the school year.  Warrior Chor and Bella Voce combine during their rehearsals to create this ensemble.