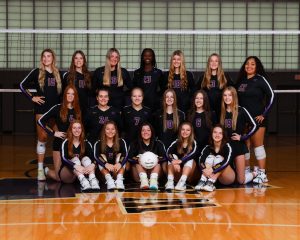 The Warriors Volleyball program has shown steady improvement over the past decade, emerging as one of the better programs in the CIML in recent years.  The program’s successes are highlighted by back-to-back state tournament appearances in the fall of 2010 and 2011 and return trip to state in 2018 and 2019.   The program has had several athletes receive All-State honors for their play on the court, as well as, academic All-State recognition.

Volleyball is one of the most popular girls’ sports at Waukee High School with participation numbers reaching over 85 most years.  The program provides competitive opportunities for players of all ages and ability levels.  Along with a varsity squad, Waukee also fields teams at the freshmen, sophomore and junior varsity levels.  All four of the teams play a strong single match schedule, as well as, competing in Saturday tournaments at all levels.

Congrats to our All Conference selections for the 2021 season. #BeAWarrior

A tough loss in the @IGHSAU Region 4 semifinals for @WaukeeVB against Ankeny tonight but this young team will have a lot of potential next year! @waukee_warriors

Big night for @WaukeeVB as they travel to take on Ankeny for a spot in the @IGHSAU Regional 4 Finals!!! Go Warriors!!

Come support your Warriors in the Region 4 semifinals. #BeAWarrior