In just under 20 years the Waukee High School Football program has grown from a struggling 2A and 3A program into one of the top large school programs, not only in Central Iowa, but across the state. The Warriors have qualified for the state playoff 15 times since 2004, advancing to the quarter-finals four times and the semifinals in 2004 and 2014. The program provides many opportunities to participate with schedules at the freshmen (two teams), sophomore, junior varsity, and varsity levels. Each year over 200 athletes participate in the football program.

As a Class 4A football school,  the Warriors play a district schedule supplemented by games against local non-district rivals and eastern Iowa programs. The Warriors have won the District Championship in seven of the last eight seasons.

Along with team successes, Warriors have also produced a long list of players that have continued their careers at the collegiate level including several that have competed at Division I programs.  Three former Warriors have played in the NFL.

The head football coach positions at Waukee and Waukee Northwest have not yet been filled. 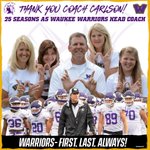 To all Warriors past and present: please accept my deepest thanks. Appreciative beyond words you were each part of our team and Warrior family. "Warriors- First, Last, Always"! 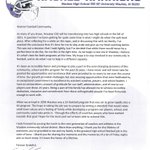 Our hearts are heavy today after learning of the untimely death of Waukee community member Kevin Slaybaugh. He was one of the founders of the Waukee Youth Football League and brought great passion to that responsibility.